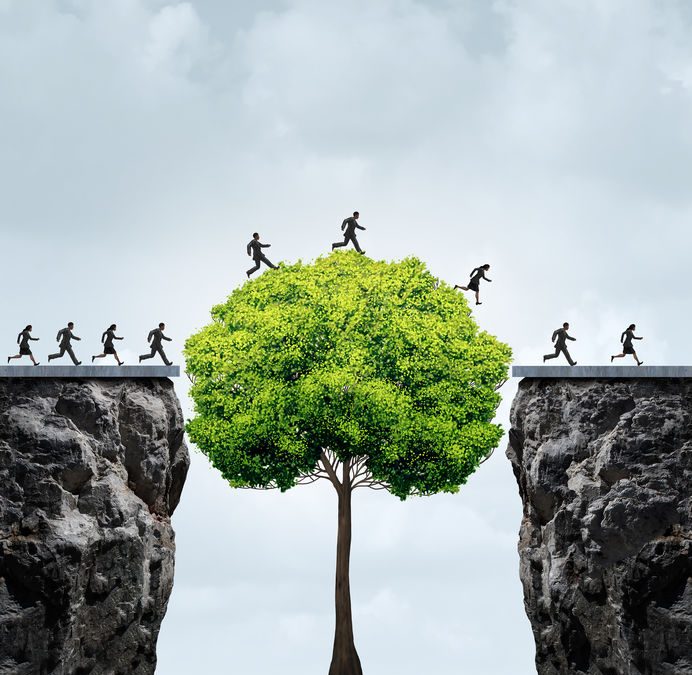 We wear our skepticism around nowadays like a badge of honor. We think it reflects our strength and ability not to fall for anything. This is only natural given the consumer-driven, marketing saturated society we live in, but is it really serving us? We live with our guards up as a form of protection, validating our nature with the importance of discernment. The Bible even talks about the importance of discernment.

Here is the problem though…skepticism is a feeling whose origin is fear. If we approach everything we face and encounter with skepticism, we are ultimately being driven by fear. We fear being taken advantage of, being hurt, being used, losing our stability, and so on. Unfortunately, anything based in something negative only begets more negative; especially fear. In my book, fear is the most paralysis-inducing emotion and pretty often it is the most harmful to us.

When we were kids, we took risks every day, mostly because we did not have a whole lot of experience, so everything (when it was new) was a risk. As adults though, we tend to scale back majorly in the risk-taking area. This is natural because over the course of most of our lives we have been burned or hurt in one way or another, often many times. We “learned the hard way.”

Yet the truth is, when you put up a fence, such as a guarded heart and mind, you not only keep out the bad, you fail to let in the good. As a result, you protect yourself from great loss, but you also prevent great joy and growth. How many examples have we seen of millionaires, major celebrities and people of great talent that were previously homeless, broke, or otherwise in despair? How can we explain this?

It is actually not surprising because when we reach our “rock-bottom” we have nothing to lose. As a result, our willingness to take risks grows, not out of desperation, but out of having nothing left to fear. As sad as this sounds, it is not all bad. I understand this concept since my worst fear became my reality. My worst fear was losing my soulmate; my best friend; my husband; the father of my children. Losing him was the one thing I did not think I could survive. Then on a rainy Saturday in August five years ago, my worst fear became my reality. I was so unprepared; I knew not what to do.

However, I coasted for a long time on the freedom from fear born out of feeling like I had nothing left to lose. This, of course, was not true, given my two beautiful babies; Yet it sure felt that way. What I learned through hitting my “rock bottom” though, was the damaging and limiting impact of fear. Before my husband died, I had all kinds of fears. Fear of him dying or being paralyzed; fear of my children getting hurt or dying; fear of losing my job or home which were my source of stability, fear of public speaking and more.

Once I lost my husband though, I was so vacant mentally in traumatic grief, that fear could not get a foot hold anymore. Then, as I began to replenish my soul and heal my heart, I thankfully learned a lot of new things which helped me fortify myself against fear. As Naguib Mahfouz said, “fear does not prevent death. It prevents life.” I can see in retrospect how before my loss, my fears held me back. At the time though, I felt I had so much to lose. I lived a very careful life.

When a new opportunity came up and sounded too good to be true, I kept my guard up and thought I was being smart. I was a Special Agent, after all. If I were tricked into something, what would that say about me or my abilities? Shouldn’t I know better? Then in 2010 I met a man who was my dream come true. I fell so hard when I met my husband, so quickly, and everyone around me who loved me became worried. Was he really a good guy? Could I really trust him? I worried myself. Yet, over the years, it became more and more evident that he was even more amazing than I originally thought.

Then in 2018, I received a message on Facebook Messenger from a man claiming to be from a foundation that supposedly wanted to build my kids and I a mortgage-free home. This man was a stranger. The foundation I had never heard of before, and they freely admitted they did not know me or have any personal connection to my late husband or my family at all. Talk about too good to be true! These things do not happen in real life! Why would a stranger from another part of the country want to build me a FREE house?! Guess what though…rather than blocking them and writing it off as a scam, I talked to them, connected with them, let them into my life, took a risk and less than three months from that message, they handed me the keys to a dream home; no questions asked.

Were they too good to be true? No, they were not, even though they seemed to be, or rather, their offer seemed to be. Truth be told, they were just a beautiful, love-filled family that knew the pain of loss and the power of love. They could have lived by their own fears. They could have failed to trust me in my ability to be wise with my life and the home, but they do not live by fear. They live by love, which is the opposite. Through their fearless love, this foundation has done more good than I have ever seen from a single organization. It is a testament to living boldly.

This is an example of the way life can be if we live from a foundation of love and hope rather than fear and skepticism. Does this open up our vulnerability? Absolutely, but is the possible benefit worth the risk? Absolutely! How does this relate to your life and circumstances? Do not think this cannot happen to you. A negative thought begets a negative outcome. You have to believe. Remain open, take risks, and take chances, because a life without risk is only half a life.

When a door opens for you that seems too good to be true, stop and honestly measure the ratio: The ratio of the value of the worst thing that could happen happening versus the value of the outcome if the best outcome were to happen if you take the chance. When you look at it this way, you have a decision to make. Is it worth the risk of that worst thing happening for the possibility of the best? While every situation is unique, generally speaking, I would say so. As it turns out, once you take a risk and the “too good to be true” actually happens to you, it is easy to see how risk-taking really can make your dreams come true.